One of the best side benefits of teaching Media Matters in the Miami University Summer Scholars program each year: Returning to Cincinnati newsrooms and reconnecting with Miami grads.

That happened again in 2019, with visits to The Cincinnati Enquirer, WVXU-FM, WCPO-TV and Cincinnati magazine; and chats with another handful alums (plus one current student) either in person or online.

Thanks to their great generosity, Media Matters students left Oxford after two weeks with a good grounding in what it means to be a journalist in 2019. The students also returned home with some published work to their credit (posted on their individual pages, below) as well as a couple of fun videos to share.

Among this year’s crop of students were three from Cleveland, one from California, one from New Jersey, one from Wisconsin, and one from Vietnam – all entering their senior year in high school. Combined, they produced 14 short profiles of other Summer Scholars, seven profiles of other Scholars’ courses and seven Q&As with guests on the Media Matters schedule.

For the condensed version of what they learned into Oxford, check out this video — part of their presentation at the closing Summer Scholars dinner.

And here’s a bit more detail, from their instructor’s point of view:

Bruce Drushel, chair of the Department of Media, Journalism & Film, was first up on Day 1. He offered the long view —  noting that The Miami Student, launched in 1826, is the oldest college newspaper west of the Alleghanies; that public radio station WMUB aired from 1950 to 2009 out of Williams Hall; that members of the old Communication Department helped run an academic ad agency called Laws Hall from 1970 to 2007; and that MJF faculty have long embraced new technologies in teaching. Drushel also bragged up MJF’s alums, including Rick Ludwin (class of 1970) whose name went on the Williams Hall TV studio this year. With more than three decades as a top NBC entertainment exec, “everybody in Hollywood knows him,” Drushel said.

Speaking of the Ludwin Studio – that was field trip No. 1 on day Day 1, with Chief Engineer Steve Beitzel serving as director for a faux Summer Scholars TV feature story. We had just enough bodies to cover the essentials: one student each on sound, graphics and teleprompter; and two on cameras and the anchor desk. Quick learners, they produced a 90-second “newscast” with minimal coaching.

Over at King Library, humanities and social sciences librarian Mark Dahlquist led students on a journalism-centric tour. Magazines are housed near the main info desk, next to new fiction. A selection of current newspapers is downstairs in the media center, with microfiche versions of old newspapers nearby. On the third floor, King houses special collections. And, of course, online all things are possible: At Miami, students get free access to The New York Times and The Wall Street Journal and easy connections to a myriad of other journalistic sources. Good rule for any journalist or journalism student: If you can’t find what you want, ask a librarian!

Day 1 ended with a trip to the “media wing” of the Armstrong Student Center, where students sampled some left-behind treats in The Miami Student newsroom as they learned about the Student’s robust news product.

Less than two months into her yearlong fellowship at The New York Times, Miami grad Mariel Padilla (class of 2017) has racked up nearly two dozen bylines. Some of her stories come via other media. In that category: A profile of a high-schooler who broke news that inmates were reupholstering the audience seats at his Massachusetts school. Other stories are ones she finds. One example: She sat down next to Jossie Reyas on a Queens bench while covering another story and ended up with a tale about the Filipino women’s time as a cook for rich and famous clients. Either way, Padilla searches for documents that confirm sources’ stories. “They retell the story in detail,” she said.

Reis Thebault (class of 2016), like Padilla, covers breaking news for his employer, The Washington Post. A year in, he’s always looking to add to an ongoing story – whether that’s new context, a new angle or a new voice. “We can be like the fifth place to cover a story,” he said, so it’s imperative to “write them better than other people.” Exploring the human cost of news happenings is key, too. One recent example: When the photo of Salvadoran migrant Oscar Alberto Martinez Ramirez and his 2-year-old daughter, Valeria, went viral, Thebault was part of a team that reported and wrote a profile about their deaths while trying to cross the Rio Grande and enter the United States. 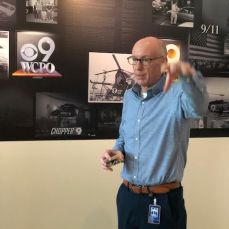 E.W. Scripps’ Chip Mahaney knows his way around a newsroom.

Cincinnati’s skyline makes a great backdrop for some WCPO-TV reports. 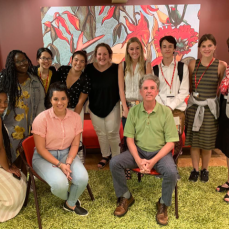 Meanwhile, Cincinnati newsrooms are well served by a bevy of journalists (some alums!) who welcomed us:

Alums who rounded out the guest list had equally on-point insights for students.

During their two weeks in Oxford, Media Matters’ scholars got a close-up look at campus. Hoping to see them all again soon — as Miami students.