New York City never loses its allure — for me or the media students I bring to the city each January term.

This year — the fourth for Miami University’s NYC Media class — was as thrilling as the first time. 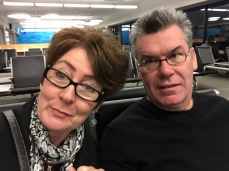 Waiting for an exit strategy, Patti resorts to airport food for lunch. 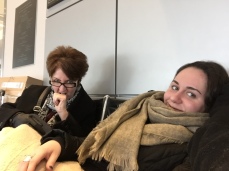 Beatrice Newberry and I wait for American Airline’s car service to get us to the city.

Weather interruptions delayed our Saturday arrival by a few hours. A plane, a van and a cab later, we hit the snowy city. Some years we dodge the weather. Other years, not so much. My travel partners — husband, Doug, and daughter, Beatrice, a first-year Miamian — were good company. 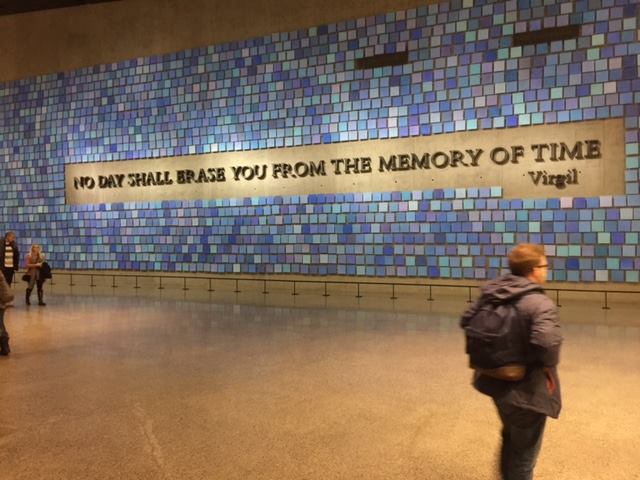 A trip to the 9/11 museum is also a NYC Media tradition. It fits into the trip well since so many of the artifacts rely on the work of journalists. Each of the 2,983 watercolor squares in Spencer Finch’s mosaic — titled “Trying to Remember the Color of the Sky on That September Morning” — represents a victim of the 2001 or 1993 attacks.

Gail Collins switches side of the table — a rarity!! — for a group shot. 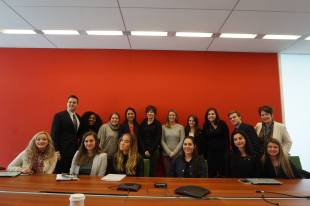 New York Times public editor Liz Spayd jumped into the hot seat when she took the job from Margaret Sullivan.

A trip to the Mighty Times is always a highlight of the week.

We began the official visits during our action-packed week at The New York Times. After great chats with Times columnist Gail Collins and public editor Liz Spayd, we learned about the demanding audience at NPR from its public editor, Elizabeth Jensen. Monday also included a visit with Miami grad Caitlin Von Mol, a producer at A&E Television, in the living-room-like conference room at A&E.

Bloomberg staffers are at the top of their game. 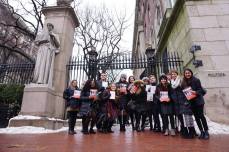 The Pulitzer Prizes are even more impressive when on the campus of Columbia University. 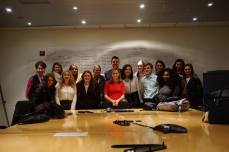 Stephen Colbert welcomes us to his show.

Day Two had us all over town: 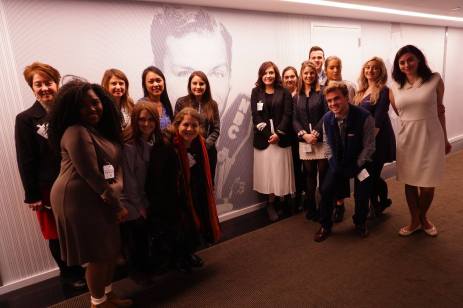 Even the hallways at NBC inspire awe. 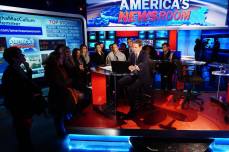 Bill Hemmer is a master juggler on the set of “America’s Newsroom.”

David Marino-Nachison treats us to a walk through the Wall Street Journal offices.

“Morning Joe” hosts invite us to the desk during commercial breaks.

Joe Scarborough and Mika Brzezinski check their phones during a break.

Not sure what Alyssa Sato and I try a question.

We spent a lot of time in midtown on Wednesday: 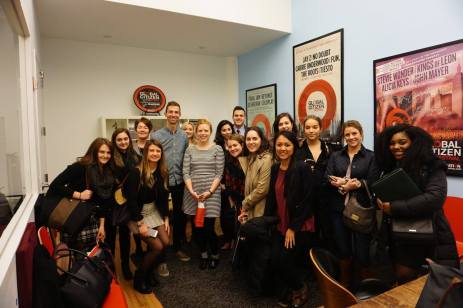 At BuzzFeed, clicks are the thing. 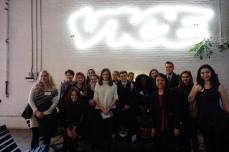 VICE is growing its audience with its newish HBO relationship.

We took it a little easier on Day Four with four stops, leaving students free to explore Brooklyn in the evening:

As students prepared for their trips home, we squeezed in two morning visits:

Home again. Went too fast. Time is short. Now to grade student work, and prepare for the spring semester.

As always, I offer most sincere thanks to our guests in New York, my colleagues and students in Oxford, and my “assistant director” and life partner Doug Newberry.